In 2004, Peter Underdog released the CD in one era...and out the other which had limited distribution, poor airplay (maybe one spin on Valley Free Radio), and was finally recalled by the distributor because the cheap ink-jet printed labels were known to gum up CD players (in the unlikely event that someone dared to listen to it).

That release did contain the gem Superegomaniac, an anti-Bush rant inspired by George Bush: The Unauthorized Biography, and by the Iraq war. The lyrics were (in part)

it's not i'm antisocial
it's just a function of the half-life of my zoloft
my attention span's unfocal
but it's long enough to tell you that you better....

but it's long enough to tell you freedom's no longer free

Not exactly a little hug for the Bushie. Peter Underdog, who makes no attempts to hide the fact that he is a member of the Democrat party, says that original track from in one era... will be remixed and re-released "real soon now".

In the meantime, he has 'trumpdated' this old tune with new lyrics about you-know-who. This release is designated Superegomaniac 2.0 as it is a major update of the original. Any incremental updates will be designated with minor decimal version numbers, 2.1, 2.2, etc.

Now is a good time to release 2.0, since this could all be old news in a couple of weeks. 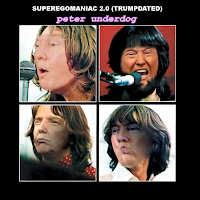 Posted by peterunderdog at 7:17 AM