Soul Of A New Machine

Peter Underdog was once a student in the Department of Computer Science at Western North East University way back in the early days of the Information Age. They taught him arcane, now mostly dead languages like Pascal and COBOL (which actually lives on in the form of millions of lines of codes written in the 50s and still running on insurance company computer hardware). The machine that the COMPSCI students logged into to practice their coding skillz was a Data General MV/8000 "Eclipse", designed and built in Westboro (or Westborough) Mass. The story of how that machine came to life was  immortalized in the book, "The Soul of A New Machine" by Tracy Kidder. 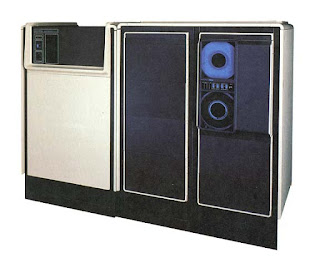 A few years before his first login into that big piece of computing iron, Peter Underdog had written a song on an old upright piano in his parents' basement, entitled "I'm A Machine", in which the title character was more of a soulless mechanical entity than a computing device with a tortured soul.

"Soul of A New Machine"  (the song, not the book), didn't come together until decades later, melding a groove once written on an old Dell Laptop, combining a funky bass, Zappa-like xylophone, and mellotron flutes, with the old "Machine" song, rewritten from the perspective of the machine itself which now has a healthy glow thanks to AI and LEDs, and like Philip Dick's androids, counts electric sheep at bedtime.

Posted by peterunderdog at 6:20 PM